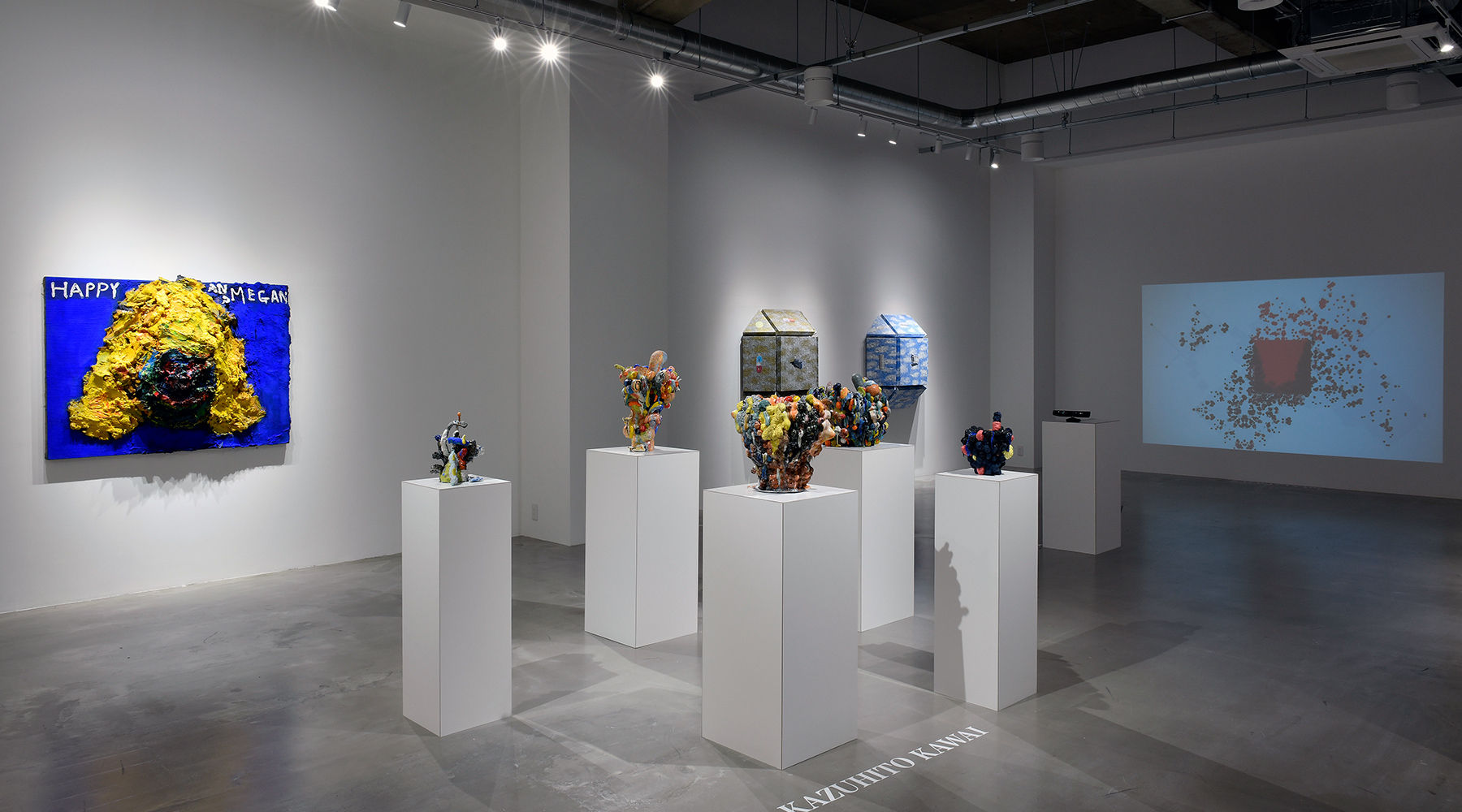 “H―C三N” – A dialogue with hydrogen cyanide and fear, reveals the true nature of who we are.

The emergence of a single organism, COVID-19, has spread an irresistible “fear” and exposed a deep-seated emotional darkness, sadness and anger at the distortion and fragility, division and discrimination, disparity and absurdity of the society that had been hiding under the thick veneer of “polite society”.
This is exactly what happened during World War II, when anarchy and “fear” ruled the world.
It is reminiscent of the hydrogen cyanide used during the Holocaust.

Ironically, it was COVID-19 that proved that the world is “connected” and that all human beings are “equal” (in the face of death), defying borders, disrupting the capitalist economy and changing the landscape of everyday life.

Artists mull over this world by facing the future, itself still headed towards a realm that no one has yet imagined, truly facing their “selves”in the process.
Oil paint, clay, 3DCG and code. The process of struggling with the canvas, each in his own “language”, amplifying and accumulating, and eventually dissolving, is like an organism that never stops changing shape.
At the moment you confront your inner fears in the presence of these works, a new dialogue, a new language, will be born.
What will you say when your “fear” celebrates beauty?

Michael Ho
In this set of work, Ho alludes to the Japanese folk creature, the amabie, a creature believed to ward off the effects of a pandemic. Through various vague allusions to current global catastrophes, the notion of “empathy fatigue?” confronts the viewer through a tongue in cheek, agendaless question. Perhaps the geometric form of the work functions as some sort of talisman to ward off empathy fatigue; Maybe it exemplifies the absurdity of the notion that one’s self is even capable of burning out due to secondary traumatic stress. Or perhaps engaging with such labyrinthine introspection is the very process that distracts one from the apocalyptic reality of 2020 that humanity should not ignore. Talisman of the Amabie juggles with the concepts of solipsism, escapism, and self care in the pursuit to agree upon the fine line that distinguishes each concept.

Nanae Mitobe
Corona pandemics are a threat to humanity. Even with advances in medicine and public health, they have evolved to become resistant to drugs and become highly toxic, just as humans struggle to fight disease.
Looking back on my life, this may be the first time I’ve experienced a global pandemic. But while current events are happening every day, they are so indirect and remote that watching the news made them feel like distant matters, like I was on the outside of the world.
However, the world was caught in the middle of a common pandemic, and for me, who had been painting portraits for a long time, the lack of contact with people led to a major change in my consciousness.
Then I became obsessed with the news coming from social networking sites abroad.
The news of people holed up in their homes, wild goats flooding the streets, and animals living freely with no human presence particularly caught my attention. I also made drawings of animals and other things I had never drawn before. Since I no longer had contact with people, it felt unnatural to draw people as I had done before, and I naturally drew motifs I had never drawn before.
As I recall, when I was a child, I loved picture books. In those children’s stories, there was a theme that I could relate to. Humans and animals are equal.
And not long after that, the BLM movement occurred in the United States.
This new work is a picture diary of events and topics that appear in the world news. I hope that this two-dimensional reportage will transcend the borders of the world, taking on a variety of colors and shapes.

Kazuhito Kawai
It seems to me that in an instant this virus has ripped the building blocks from our community and exposed our true feelings to a bare minimum.
What we’ve been able to get away with while covering up. The deception of the community.
Divisions. Disparity. Discrimination. Nation. Politics. Anger. Helplessness. Loneliness.
And we find that we have been left behind by the changes in society that were already underway.
The disappearance of illusions, the loss of construction, is accompanied by a deep wounding of one’s self-esteem.

The impact that Covid-19 has had on society is a huge wave that is still very much beyond my ability to sort out for myself.

There is a time lag in emotions.
My brain anesthetizes my mind as I continue to record at a lower resolution.
Much later, a rough image will randomly auto-play in my brain, evoking the emotions tied to it.
I’ve always been unable to react to big changes in real time.

How did human beings overcome the major points of change in history?
Can’t we find a point of sympathy in the past that can be “historicized” and referenced?
I think art is that history itself.

In my life, there have been many identity crises and there were many transitional periods.
How did I relate to art each time?

The prostitutes who survived the post-war era, the no future mood and drugs I was into as a teenager, David Bowie and Raf Simons. Youth and danger. A suburban apartment block. Alcoholism and rehab. The white of a mental hospital. The strength to survive in the grotesque and the sympathy for those left behind.

While vaguely thinking about these things, I faced the soil.
I believe that these empathetic points that I intuitively sought out will gently accompany me to the “now” and have some meaning.

Kai Watanabe
“Acquaintances Through Iteration” is an interactive window that peers into the perspectives of individuals during the 2020 COVID-19 pandemic. The window asks participants to approach the blank surface, which partially reveals an image and expert of an individual’s personal interpretation of the pandemic. The image is unmasked through the use of Cellular Automata, an algorithm simulating the life of cells, which literally refers to the nature in which COVID-19 can spread. Increasingly close distance and action reveals more of the image, which plays with the idea of spreading virus through proximity, but in this case stands as a metaphor for the sharing of ideas. Much like how communication is necessary and unrestrainable, the desire to approach the mirror to connect with others is undeniable, but is constantly in the back of our minds as we engage in the behavior.

Amabie’s Talisman: Those Percs fucked me up, 2020 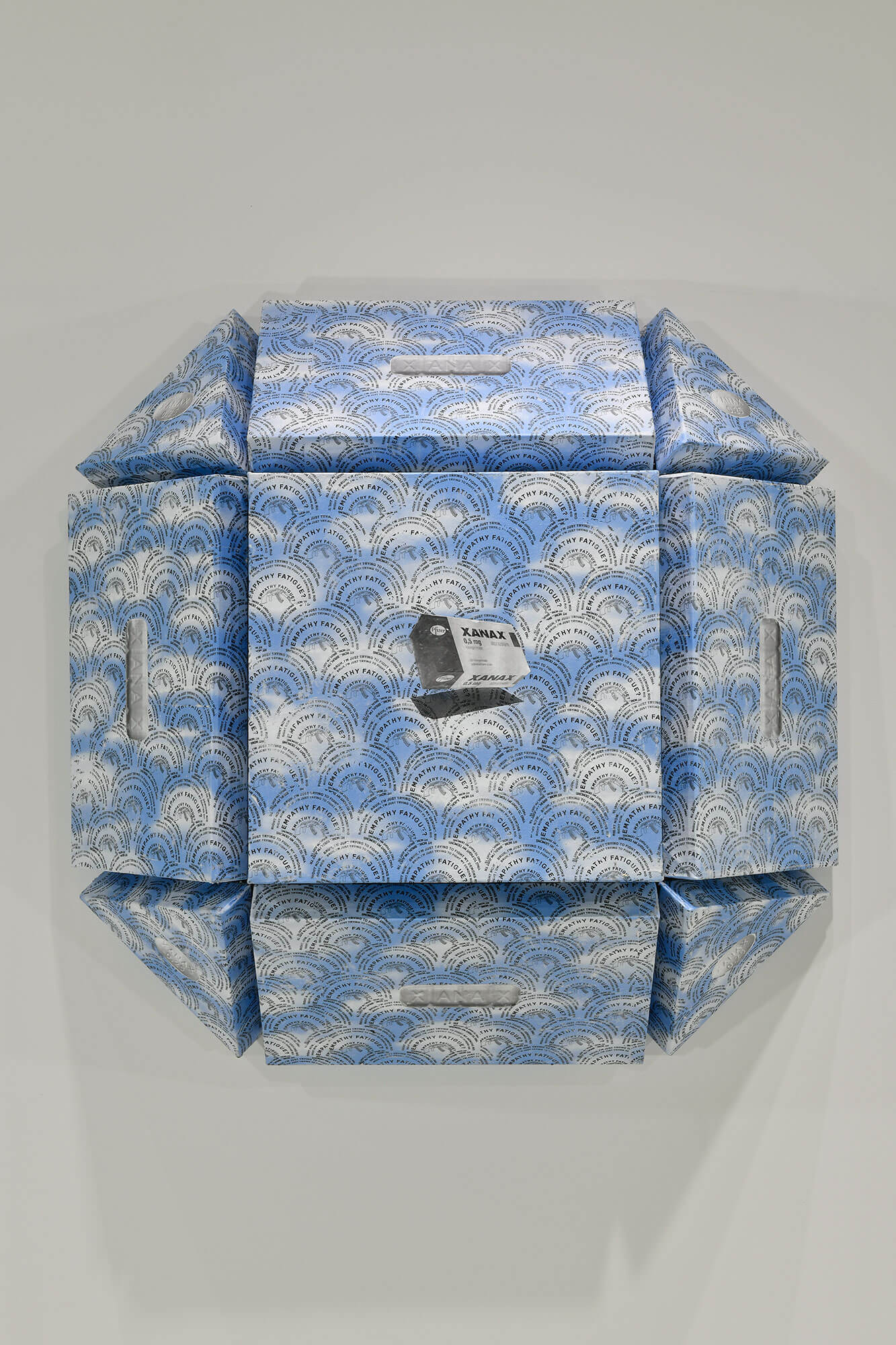 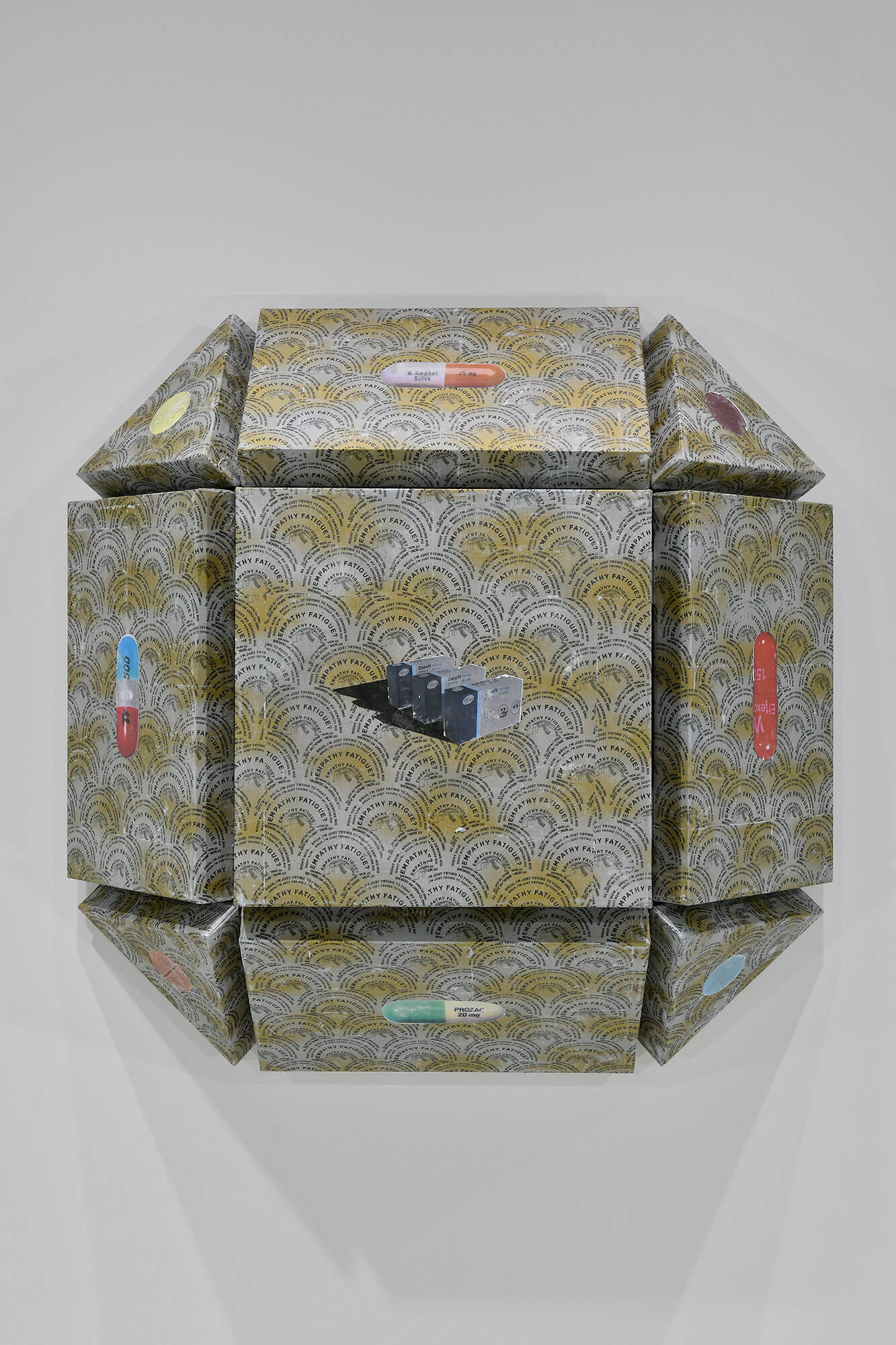 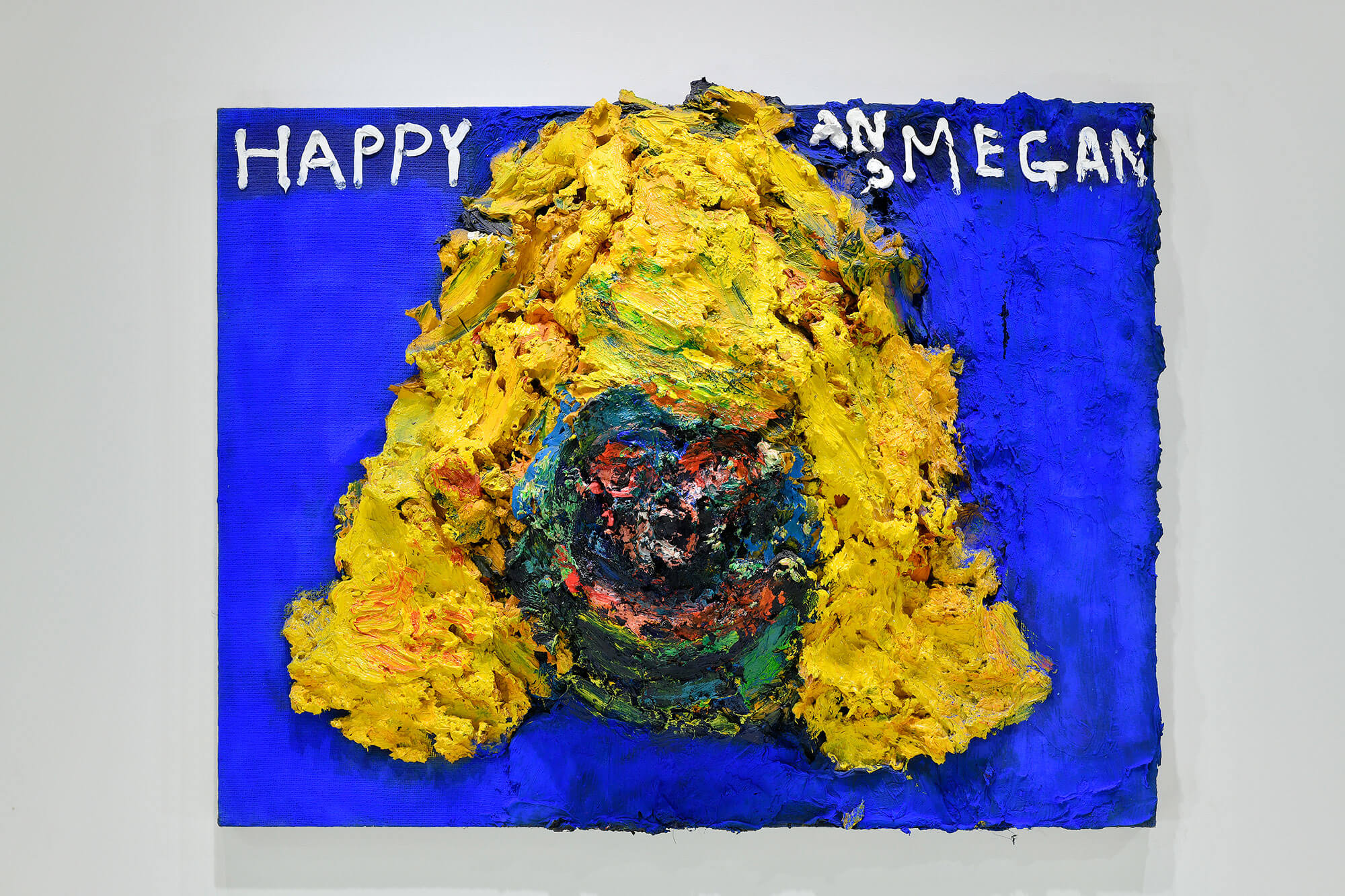 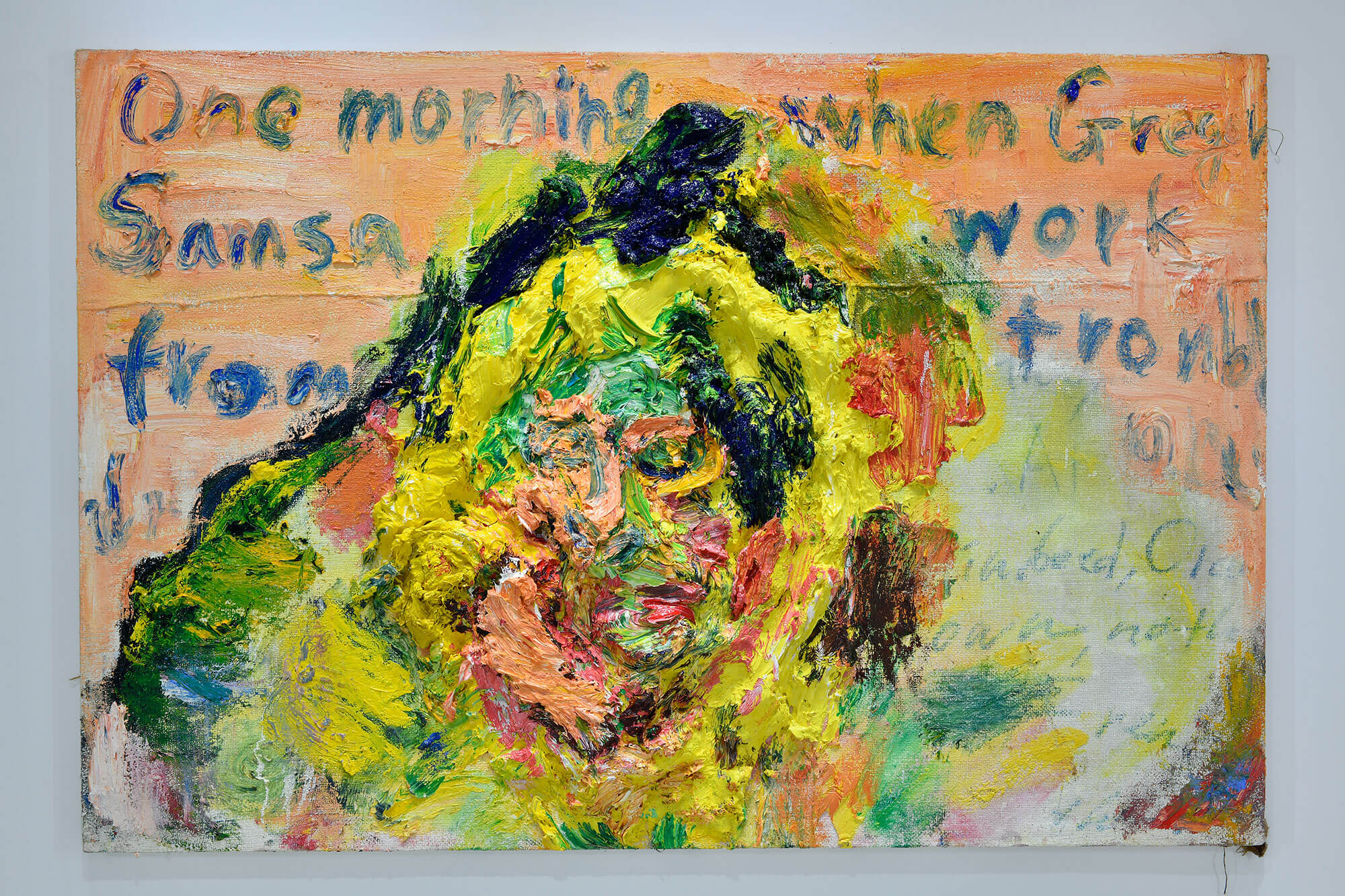 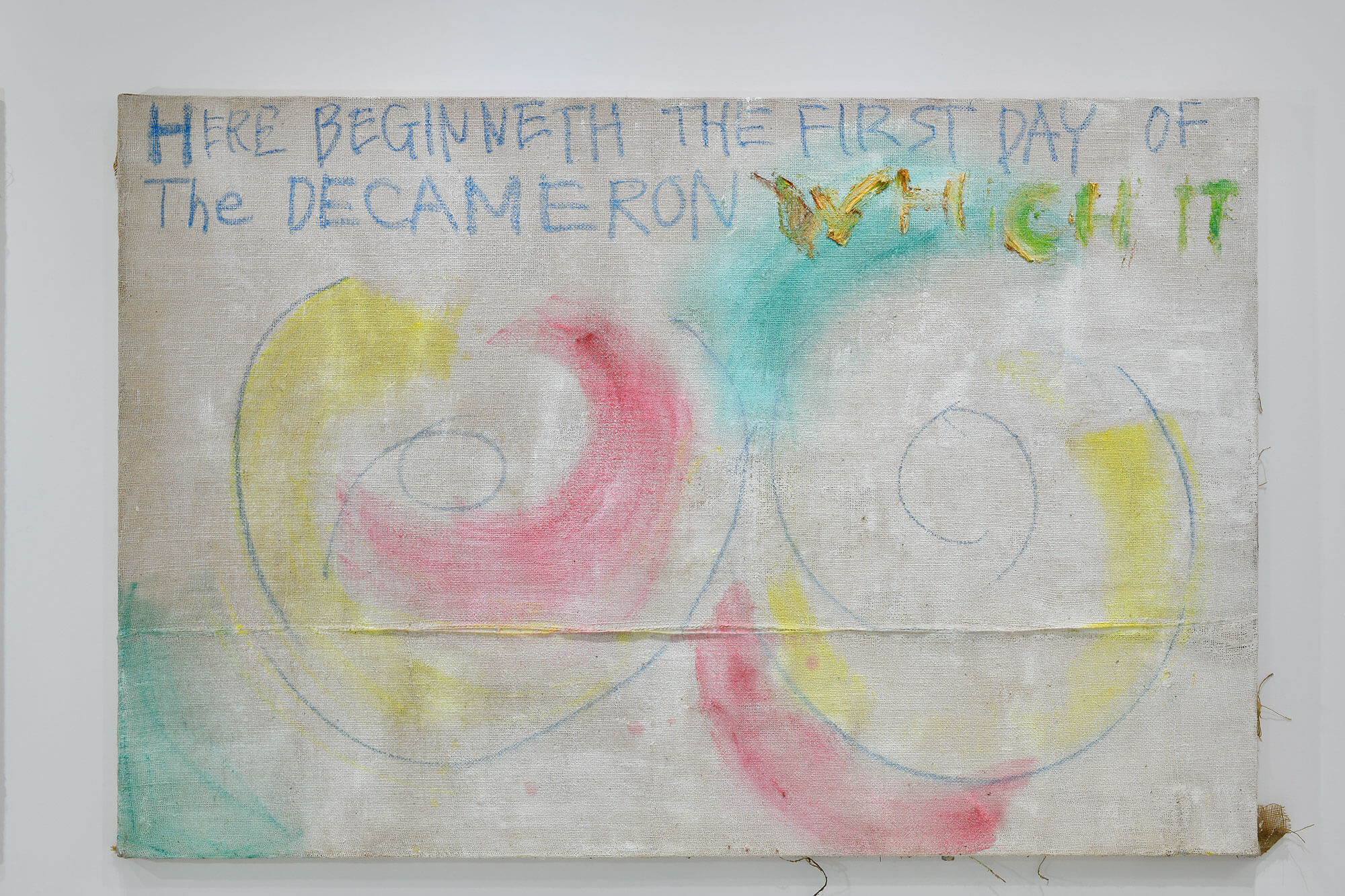 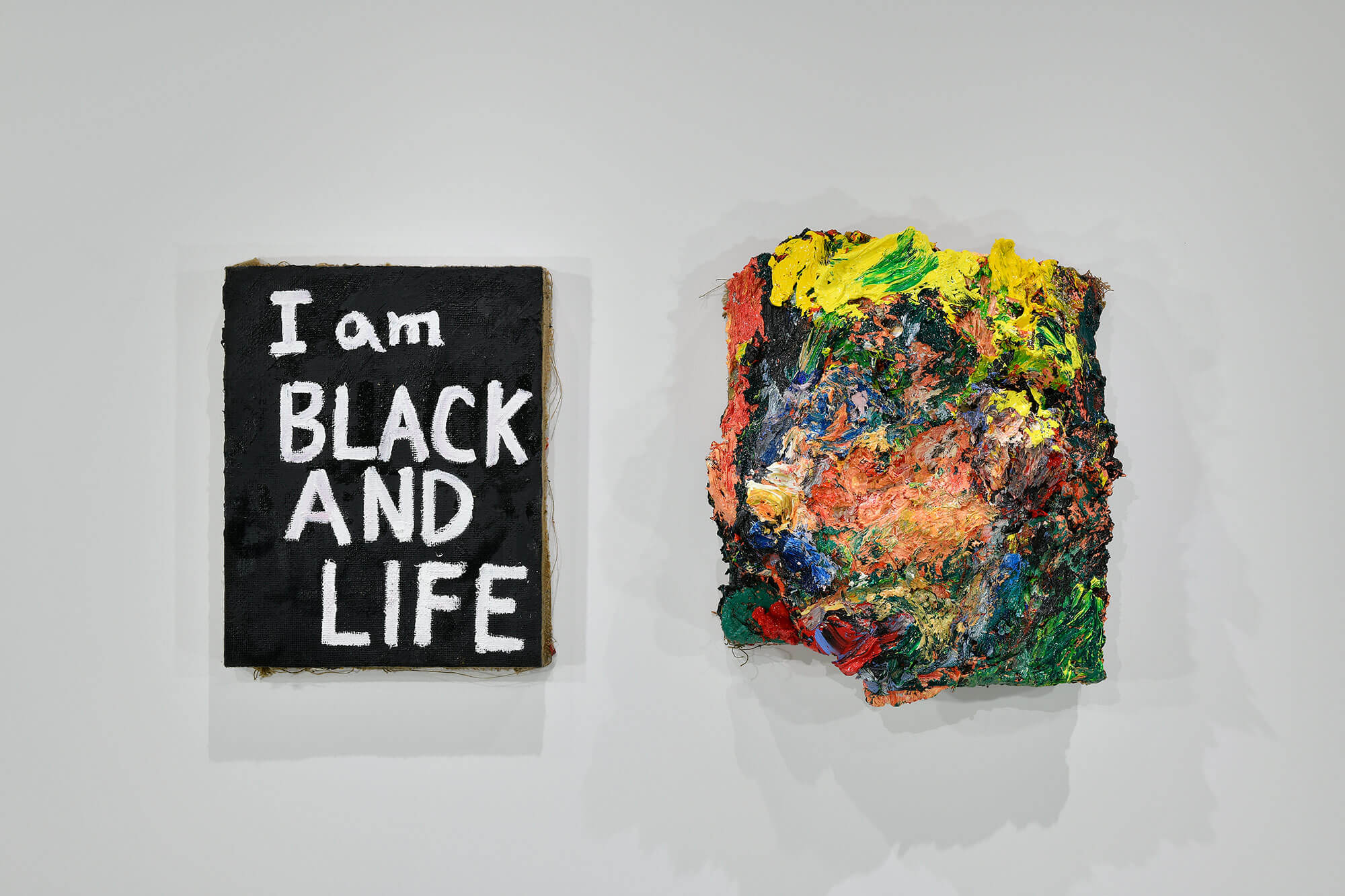 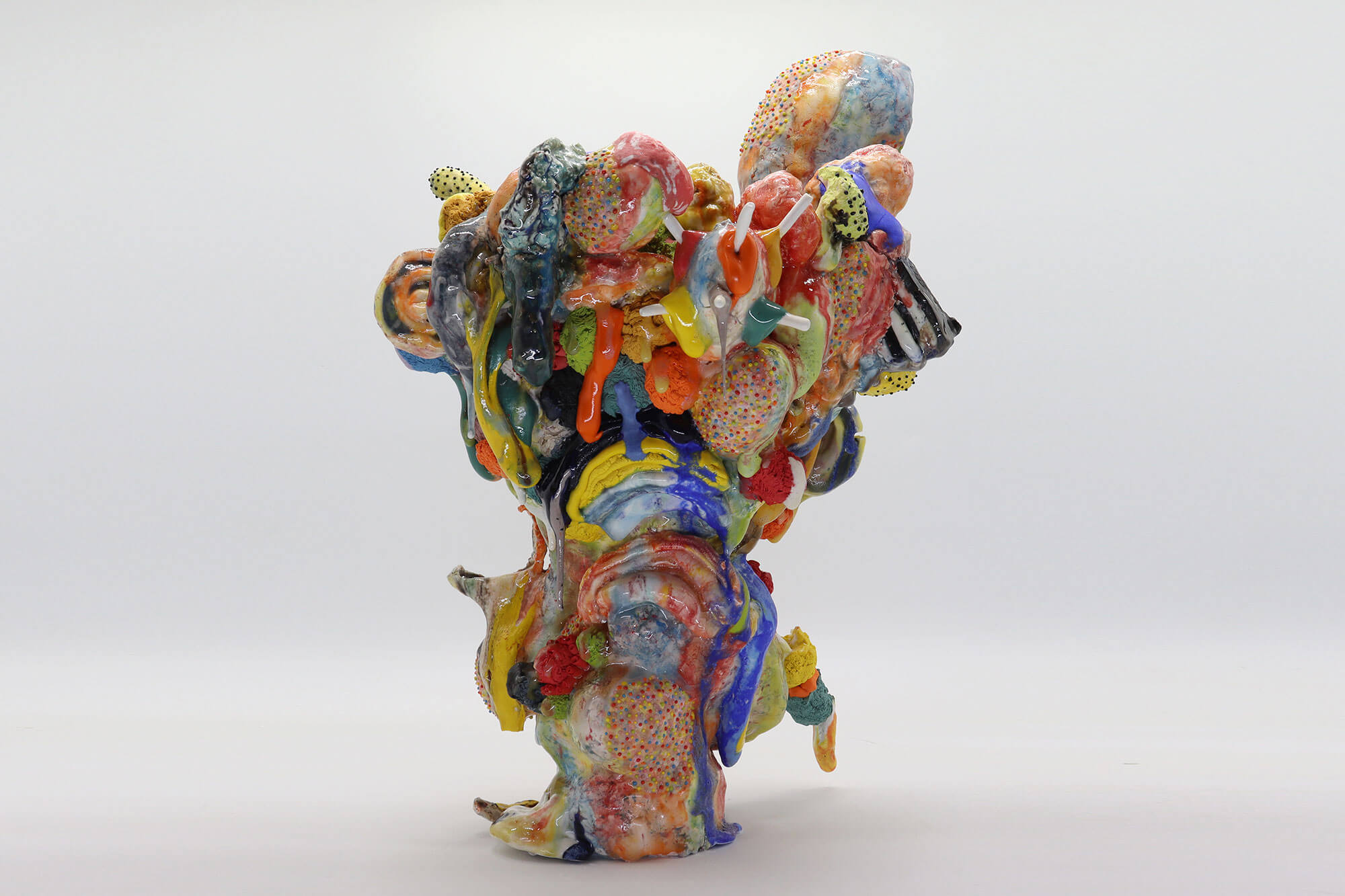 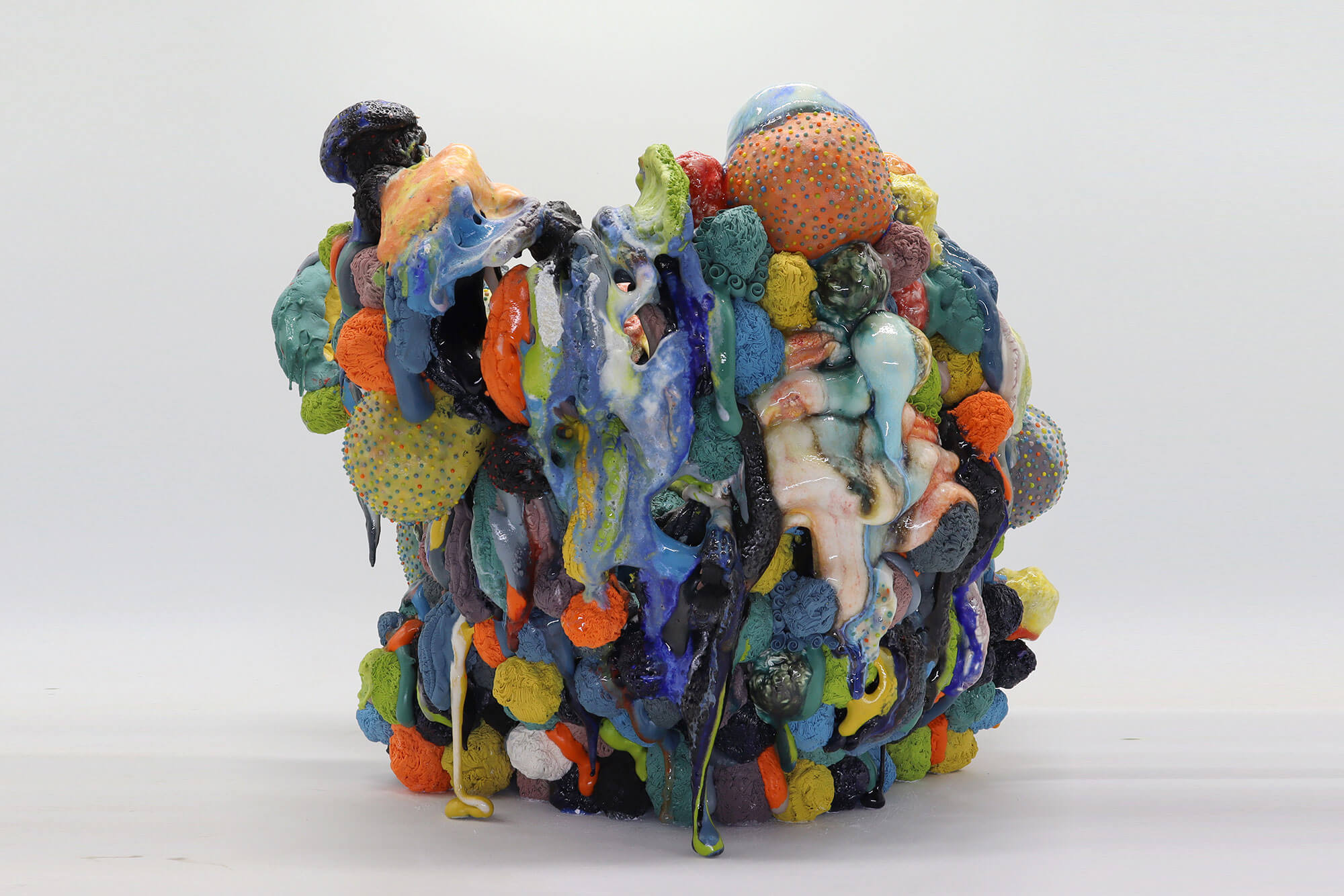 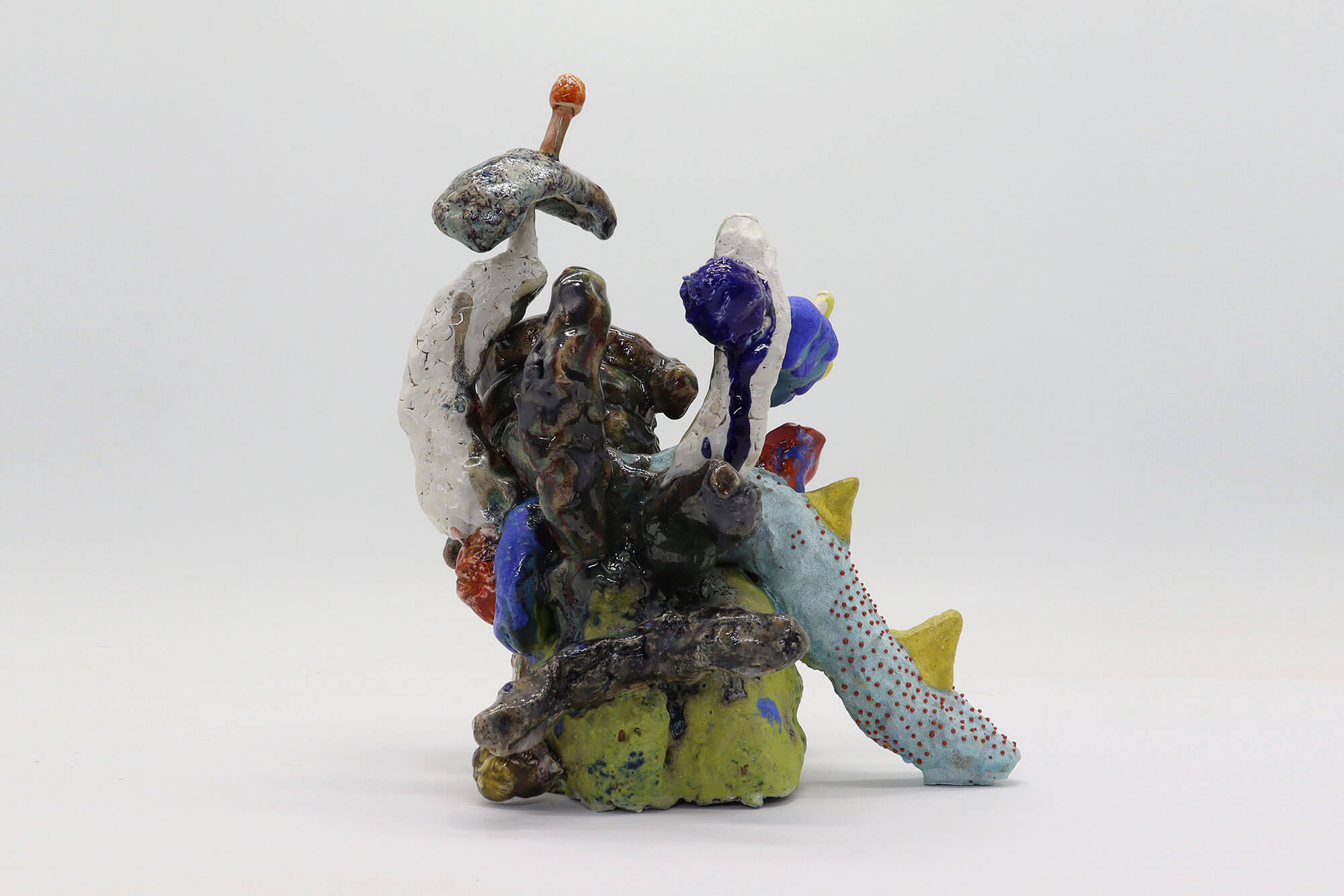 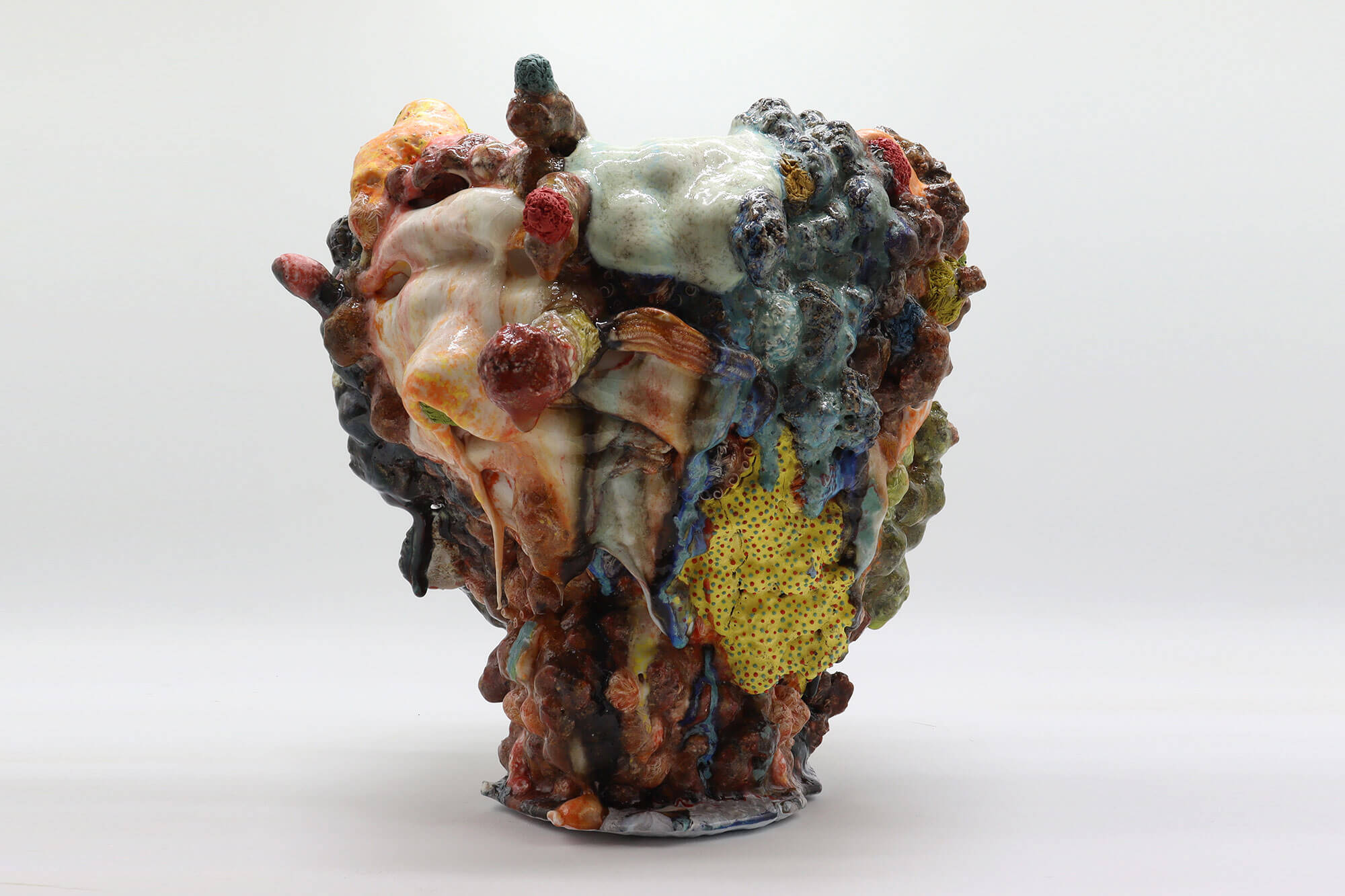 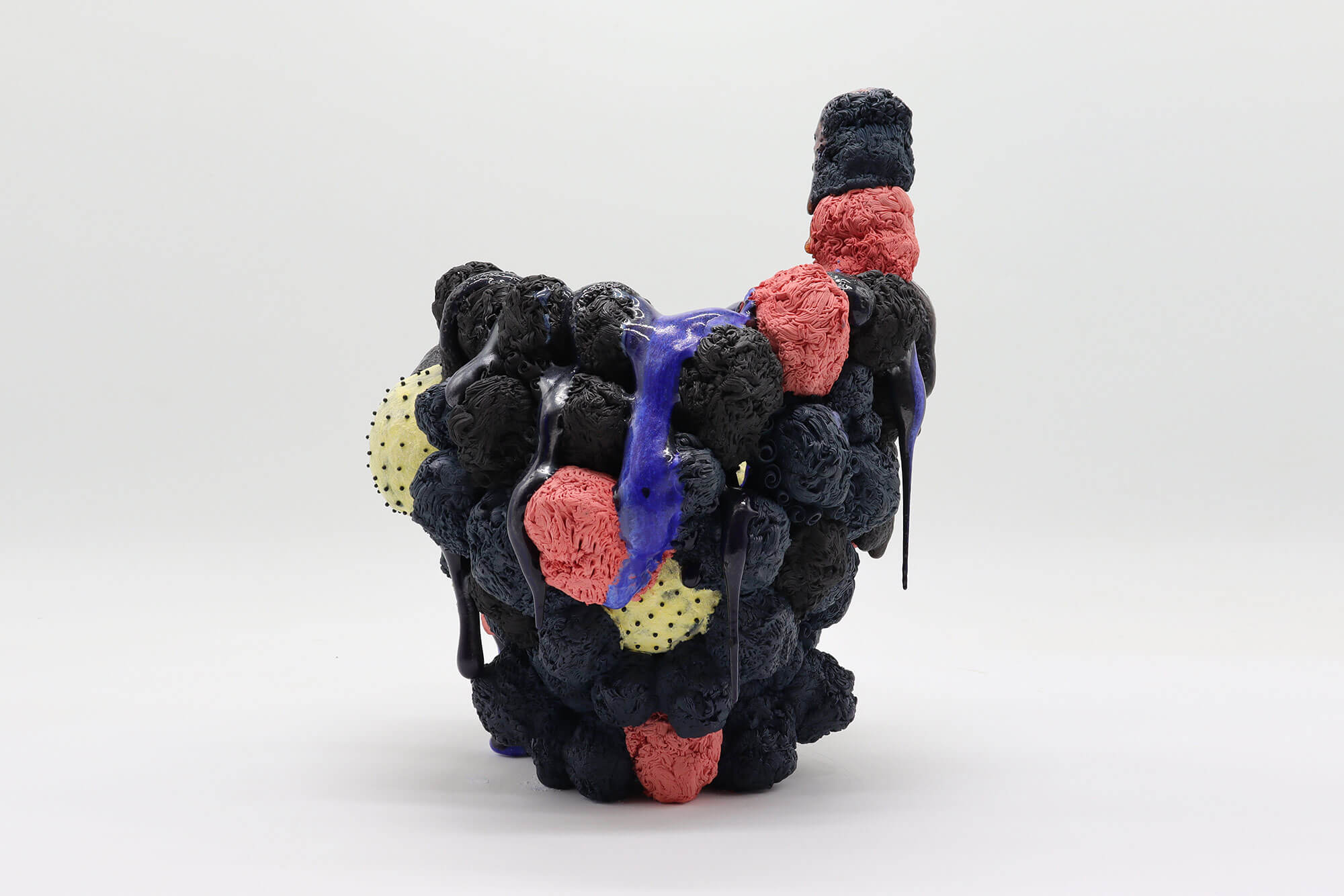 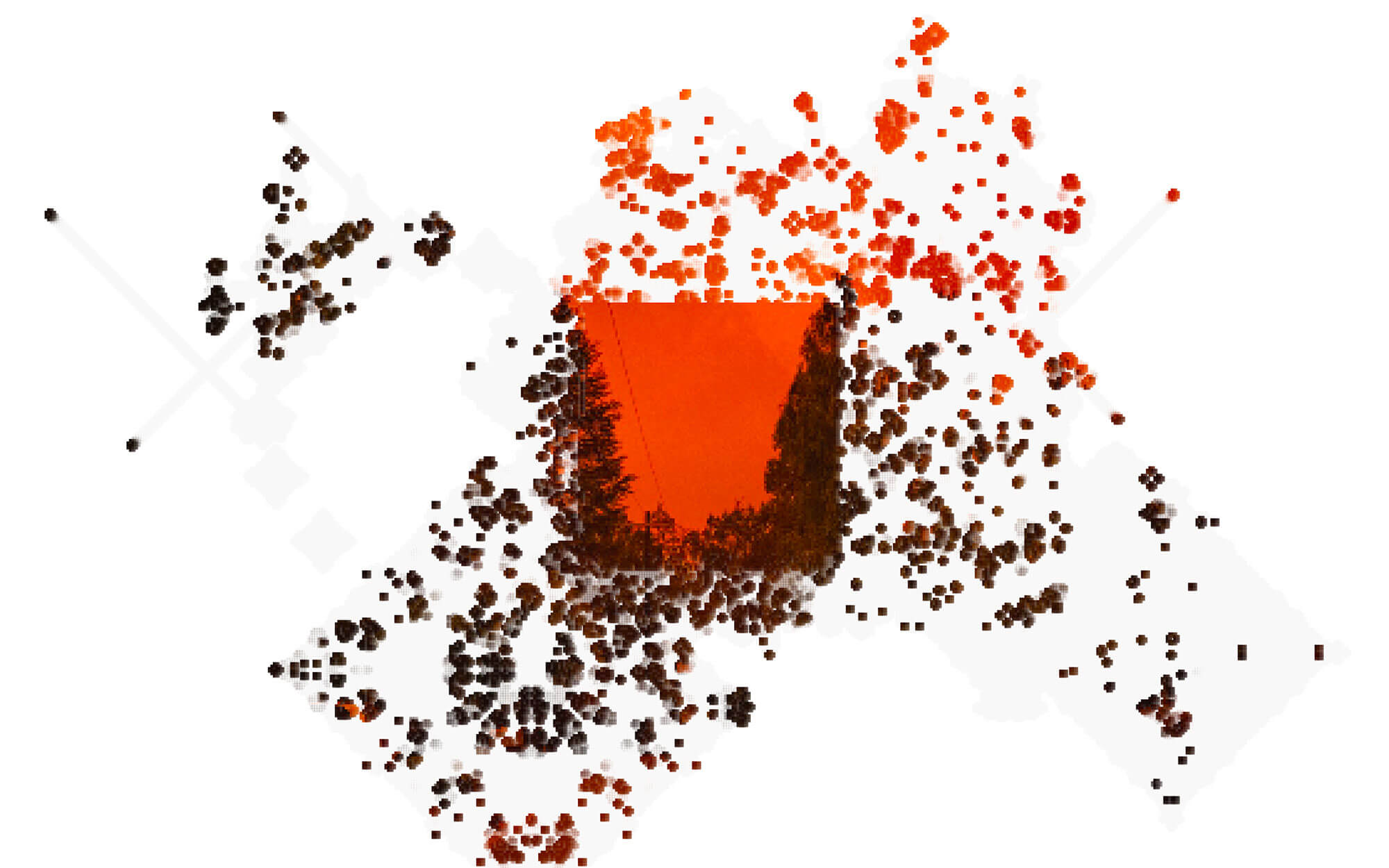 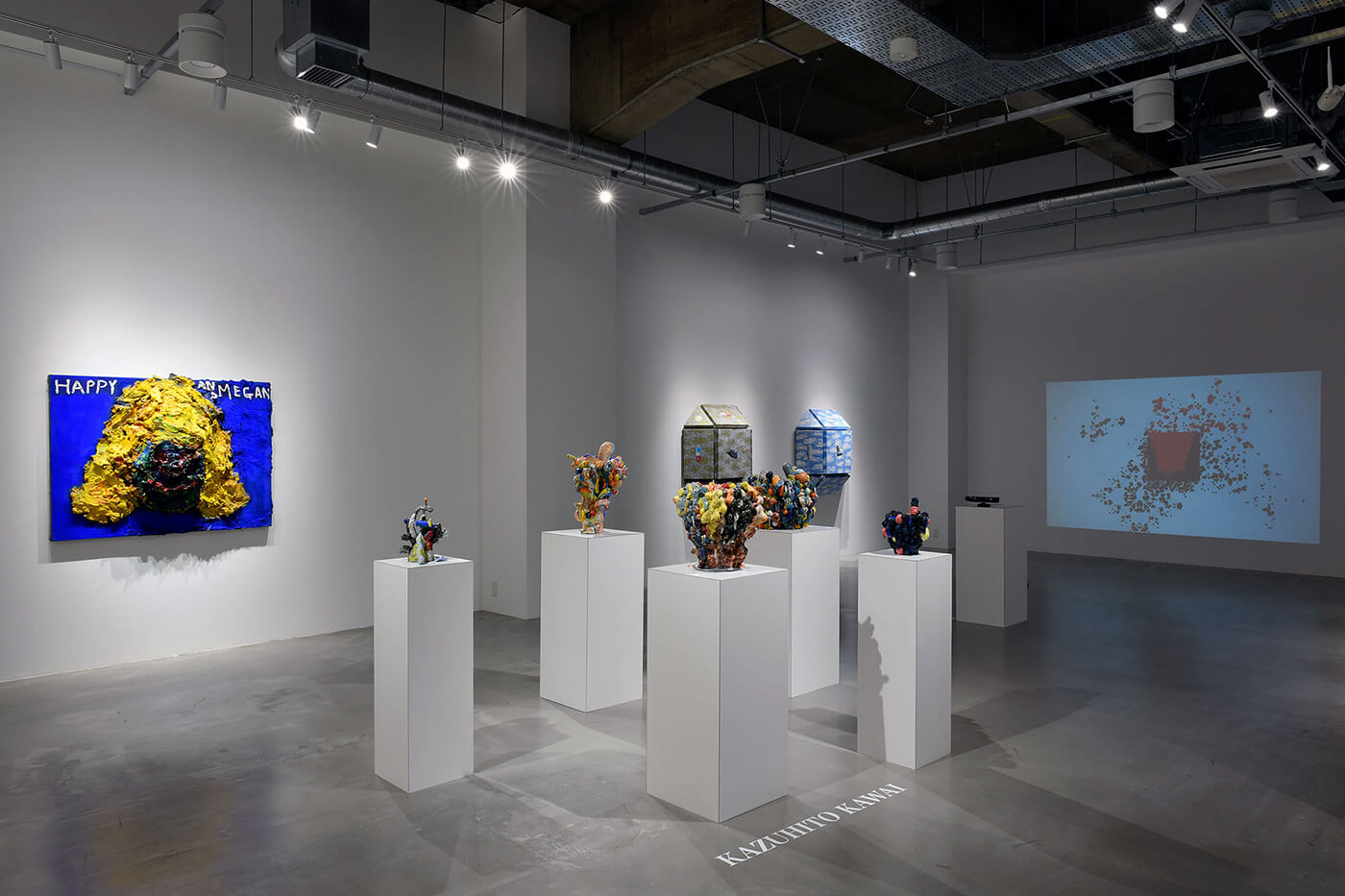 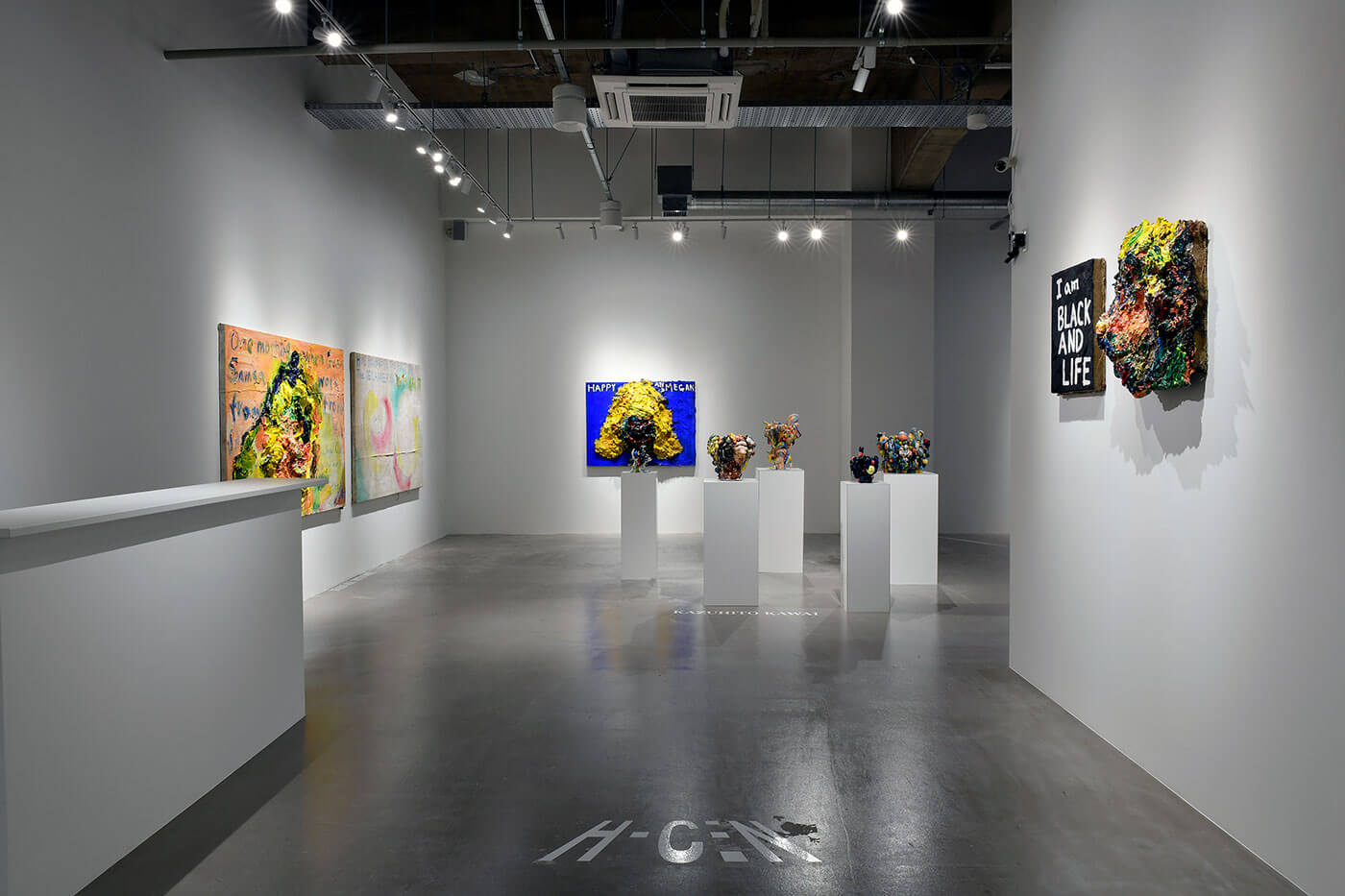 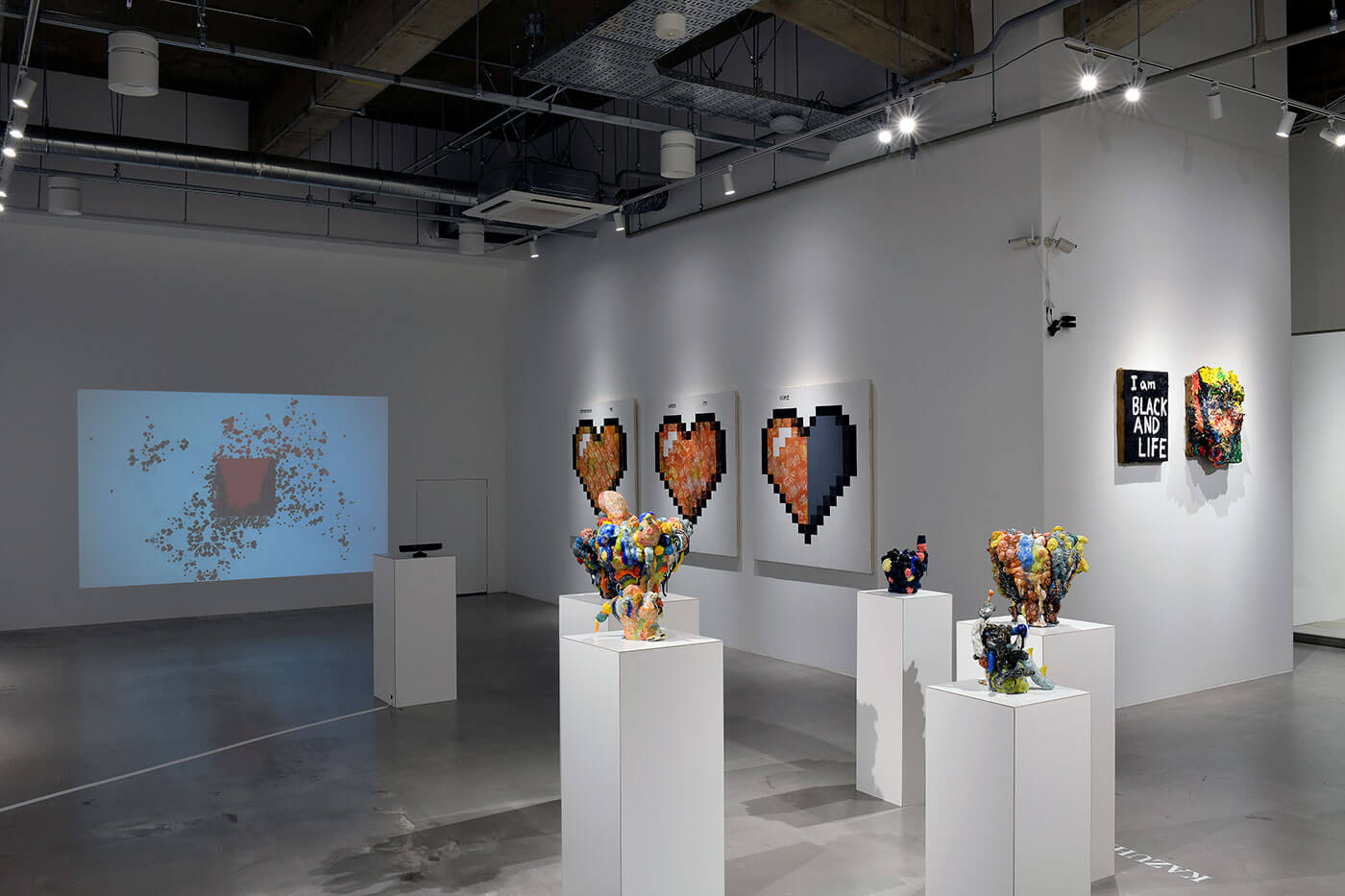 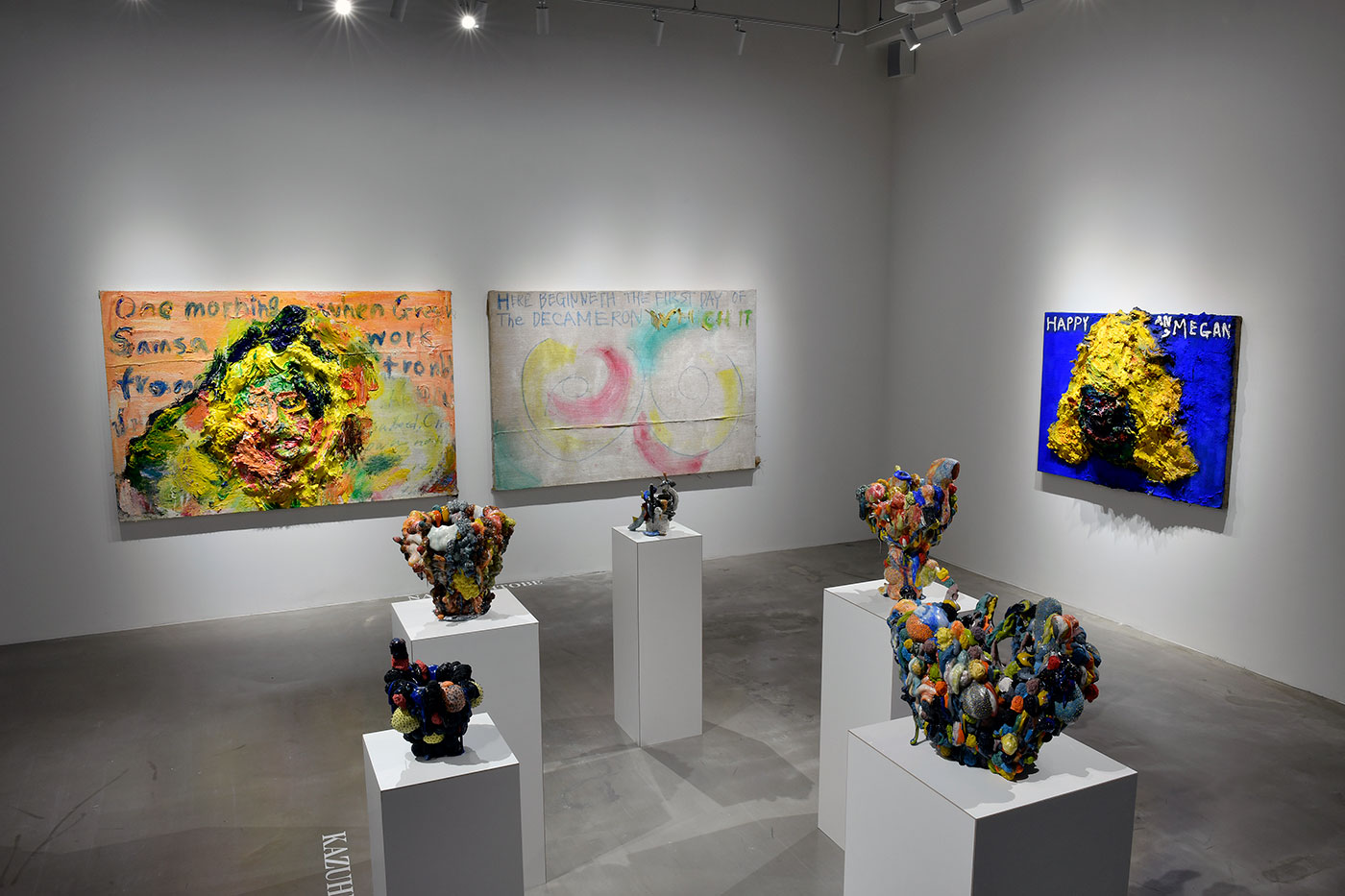 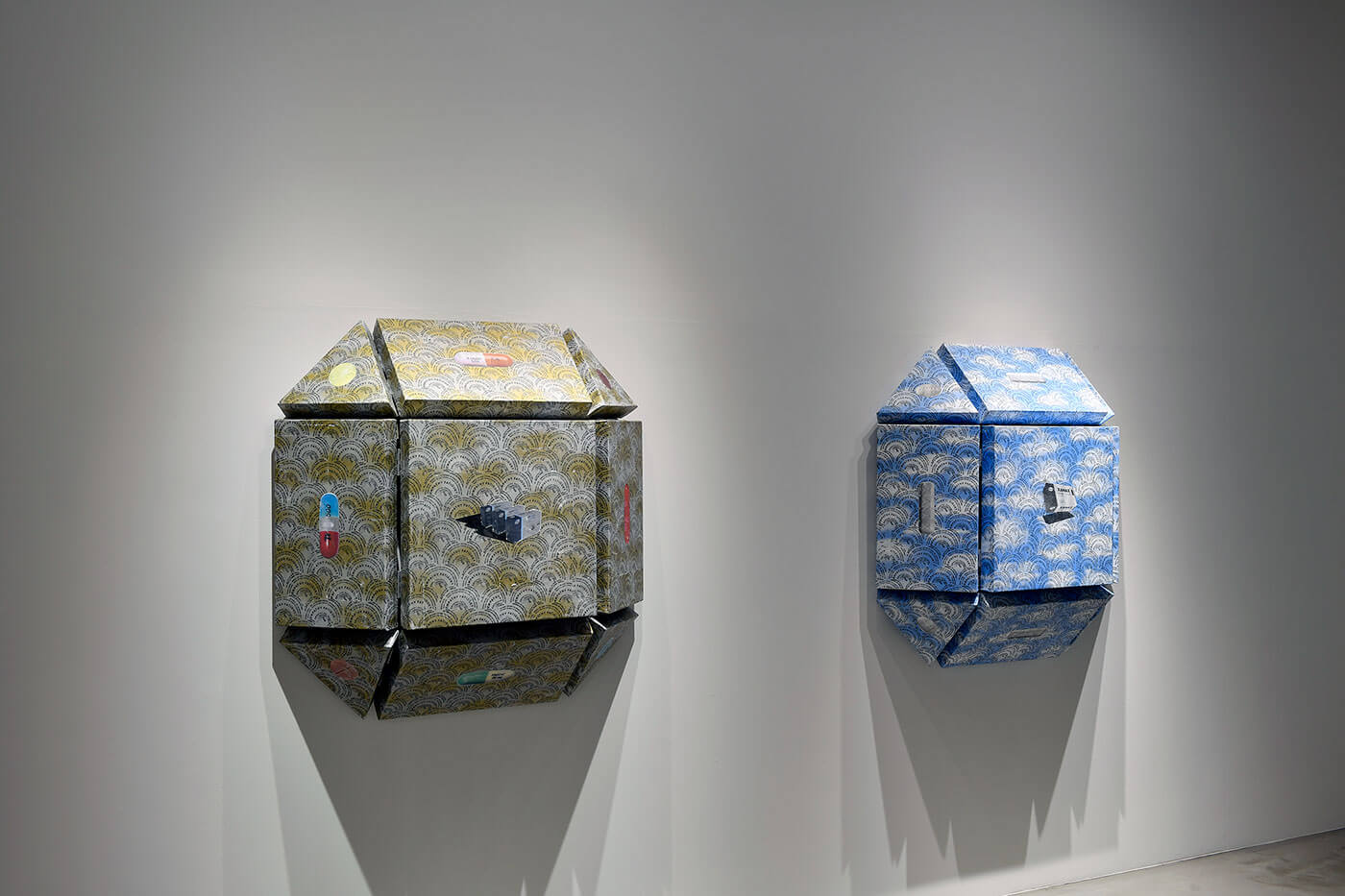 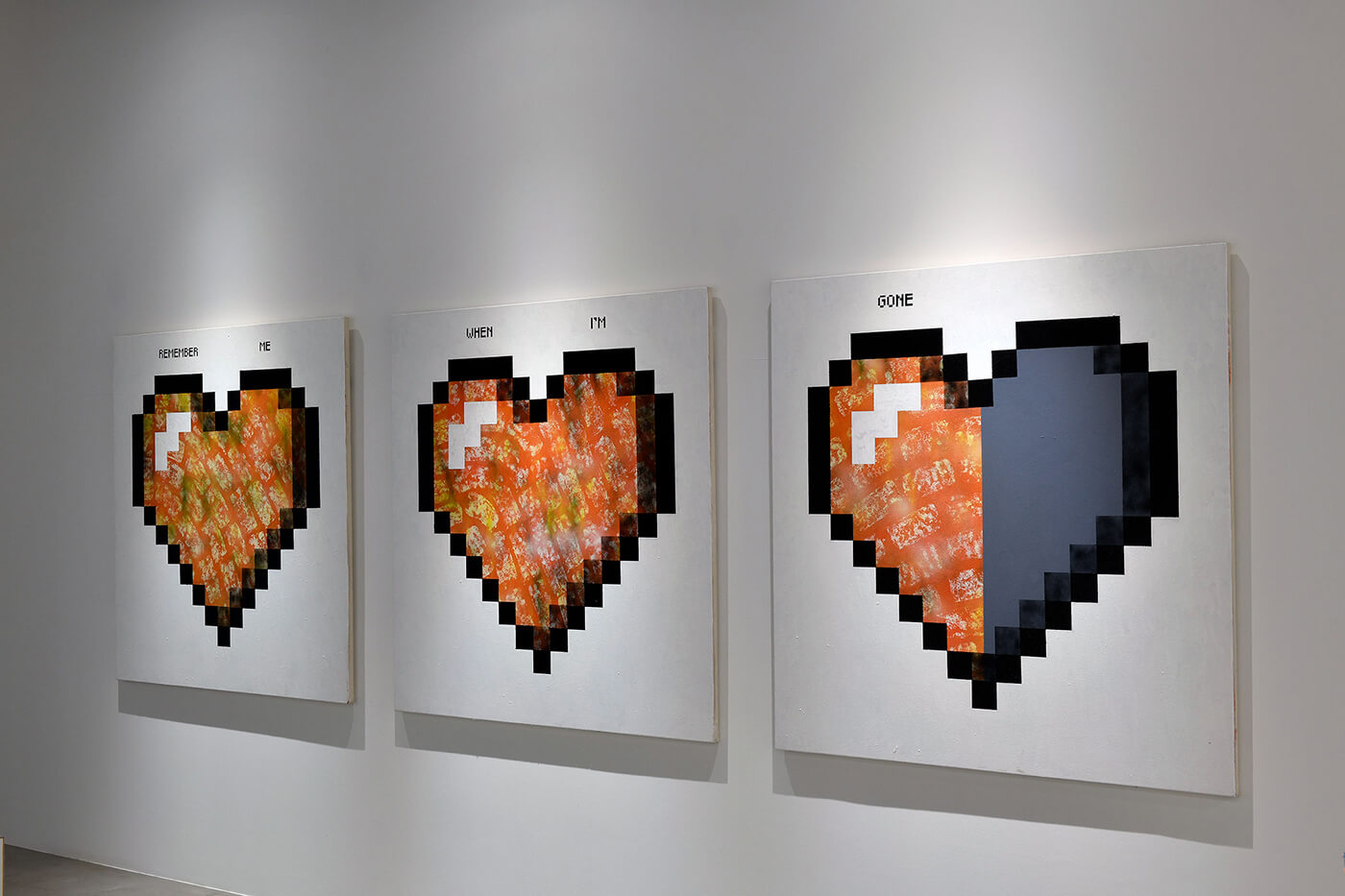 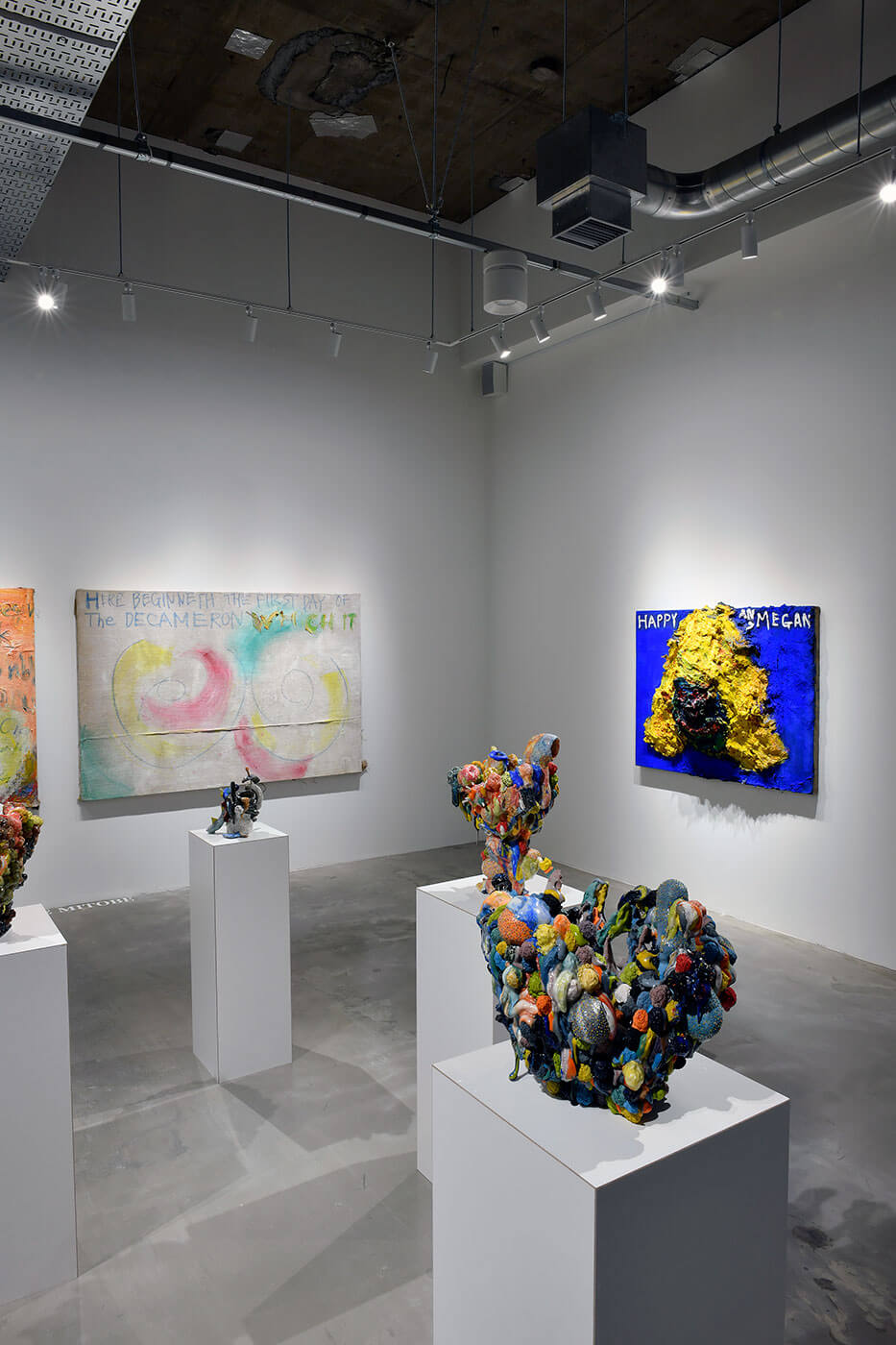